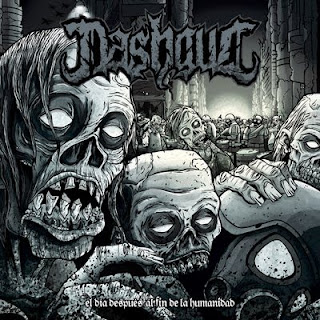 This interview was conducted sometime in Summer ’09 for Noise Reduction Zine #3, which hasn’t been printed. In celebration of Nashgul’s new LP, (that I received this week) I decided to post the interview. Enjoy!
-Will BSP

1. The first thing that I want to ask is about your band name. Are you Lord of the Rings fans? Also, I believe there are other bands with the name Nashgul, does it ever cause any problems for you?

Santi – Hi there!! Well, I always like “lord of the rings” but I never became obsessed with it, I like the books and the movies, they are great, but that’s it…. Nowadays a lot of metal bands are trying to look evil using LOTR themes, that’s nerd!! I don´t have a problem to be a nerd, but you know I´m not trying to look evil and trve!! Anyway, ask our bass player, he’s the one who got the name for the band when they were teenagers…

Iván – I think that nobody else uses Nashgul. Actually, the name doesn’t exist, it’s a conscious alteration of Nazgul, the Dark Riders. However, a countless number of bands use the name Nazgul, mostly Black Metal bands.

2. Aside from Nashgul, I know Hector plays in Black Panda as well. Do any of you play in other bands also? Do you ever have schedule conflicts with your other bands?

Hector – We are very active people when it comes to rehearsing or making gigs and tours with our bands. Each band has a rehearsal day and whenever a gig is planned we discuss it with the other bands to avoid problems. I ended up playing with 4 different bands once, in 3 different rehearsal places, 6 days a week and with no car, it’s everything about interests and organization.

Iván – I play with Hongo (www.myspace.com/fungivoro), a slow metal band that might remind you to Neurosis, and with some other bands… but we never had any kind of problem with that. We do everything that’s possible to organize ourselves so no one gets hurt. The difficult thing is to plan our vacation, we never have!! Hahaha…

Santi – I play bass since a few months ago in the grind/death veterans Machetazo www.myspace.com/bandamachetazo and got some other projects here and there, if some of them arise from the sewer I will let you know….our bass player got a hardcore punk band named Codia www.myspace.com/codiacore , check them out!

3. You guys have done quite a few splits already over the past few years. It seems to me that your sound has changed somewhat since the split with Anti-Hero, what can you say about the progression of your style since the beginning of the band?

Santi – I hate our songs from our split with Antihero, they suck, we were young and naive and we were trying to be “original”, fuck! Satan bless the day we decided to play straight to the point fuckin Grindcore!! Now we are only worshiping our grind, death and hc-crust classics….hail Bastard and Rise Above from Japan!!

Hector – Our sound has changed mainly because it’s been 6 six years since we recorded our split with Antihero, so i think that the evolution in every Ep is quite reasonable.

When we recorded the split with Antihero we were kids with no experience playing live, recording or anything like that. A couple of years ago we saw that things were going well, we were playing in festivals around Europe, an European tour, some Spanish state gigs and tours, editions in nice labels with great bands… so we began to take it “seriously”.

We are now playing in festivals and meeting bands we used to watch on TV when we were kids, like Extreme Noise Terror, Discharge, Dismember, Brutal Truth ,Napalm Death… we sometimes talk about that, it’s weird…

4. Out of all your previous splits, do you have a favorite? You have done splits with some other fantastic bands like Sewn Shut and World Downfall.

Iván – My favorite one is World Downfall’s. I think that our most strong and motherfucker sound is in there, and Telerealidade and Tú que lo sabes todo are my favorite songs.

Hector – The split with FromTheAshes. The Pushead-style artwork is fucking great and the band is amazing, they are good friends and we met a few times around Europe and even they are not active today we still have a good relationship.

Santi – Probably my favourite is our split with Sewn shut; I always loved that fuckin band!! Cheers to those lazy bastards!!

5.While we’re speaking about releases, you recently finished recording an LP, which I’m really excited about. What label will this LP be on? Also, how was the experience of writing for a full LP rather than just some songs for a 7″ split? Was it easier or more difficult to write that much material?

Hector – There are bands that can record quickly… but we are not like them, we do it slow… It took us too long, more than 2 years. We were going over and over every track but we can assure that we are 100% pleased with their arrangements as well as with their recording.

We are lucky that the owner of the studio is an old friend of us, so we took it easy, we were going there a few hours once or twice a week when we were available so we didn’t stress out, we began in December 2008 and finished in May 2009.

Santi – Torture Garden Pictures from USA and Trabuc Records from Spain are going to release a nice gatefold LP version of our new album and Power it up is going to release the CD ….we spent a lot of time preparing the new album, but they were a lot of factors involved. We spent weeks without rehearse, also we were releasing a lot of stuff thru 2006 & 2007, so we didn’t want to saturate the scene with tons of Nashgul releases in one year haha

6.Along with recording a new LP, you’re going to appear on a tribute to Repulsion. Why did you decide to record Slaughter of the Innocents? I think your version of the song came out really good from what I heard online on your Myspace page.

Hector – The truth is that our first choice was Black Breath, but they told us that we couldn’t make that one, we still don’t know why… so our second choice was Slaughter of the Innocent.

We hope to match up to the compilation and to the bands in it: General Surgery, Cretin, Haemorrhage, Inhume, Cephalic Carnage, Looking for an Answer, Blockheads, Machetazo…

Santi – Thanks for your words….Repulsion is my favourite band within extreme music, so for me it’s such an honour to be part of this tribute! Can’t wait to see it released!!

7. I always know when I get a new Nashgul record that the artwork will be amazing. Is the artwork done by a band member or a friend? What are the influences for the artwork used for your records?

Iván – Our bass player makes all the artwork (except for Worldownfall), he started drawing because of Iron Maiden’s covers. He is really influenced by Derek Riggs, Repka, Pushead, Riddickart, Putrid or Nor. He used to focus his work on children’s illustration, but now he is starting to work for bands, you can check his work out at his website, http://www.myspace.com/sendonluis.

Santi – Thanks for the compliment dude!! My main influences when I started to sing Grindcore were: Lee Dorrian from Napalm Death, Paul Pavlovich from Assück and Iñaki from Denak but also Im very influenced by all the old grind bands I love: Repulsion, Defecation, old Carcass, Fear of god, Regurgitate, Terrorizer, Warsore, Brutal Truth, Dahmer and tons more…..my lyrics are mainly influenced by daily life, the shitty city where I live, mental illness , alcohol, weed, movies, books, and a lot of music of course, too much to mention!!

9. Spain has some great bands, especially some good grind bands like Looking for an Answer and Disturbance Project, aside from Nashgul. How is the scene there, especially relating to grind? Are there also some good fests every year?

Hector – There are good Grindcore bands, actually… not only the ones you mention but Freaknation, Haemorrhage, Crisischrist, Ras, Aural Butchery, Violent Headache, Unsane Crisis and so on. There are great HC, Punk and Crust bands too that knew how to wake up in the last years.

Regarding festivals there are not a lot of them… but we have the Etengabeko Zarata organized by Fres, from the band Ras; and Trauma Fest.

Iván – The truth is that there are lots of good Spanish grindcore bands… but people who play in these bands is always the same. Here in A Coruña, we are from 10 to 15 guys playing in 8 or 9 different bands…

10. Would you recommend Spain as a place for other bands to tour?

Hector – To be honest… no. The number of people attending to shows at the Spanish State is not as high as it was a few years ago. Here we live in the end of the world and bands used to think that playing here didn’t worth it. But 8 years ago we began organizing shows in abandoned premises under the name of La Cúpula del Trueno Death Crew. Today we have A Casa das Atochas Squat (http://www.myspace.com/casadasatochas) to play in and we make sure that the bands get money enough, have a nice dinner, some drinks, and a clean and quiet place to rest… and we also offer them the chance to learn about our night life!!

So today Hardcore-Punk-Grind-Diy bands stop here to play. Oporto is organizing lots of shows lately too so we are having movement in the area again. We are proud to say that bands like Inepsy, Consume, Looking for an Answer, Magrudergrind, PLF, Hellshock, Inquisition, Yacopsae or Gasmask Terror played here!

Santi – We don’t have any US tour plan at the moment!! We were supposed to tour across the US last year, but finally it was not possible, damn!! Anyway we REALLY want to do it, so we hope to find some nice band to tour with and do a 1-2 week tour sometime soon!! Anyway we are booking now an European tour for September!! Cant wait for that!!!

Thanks and CHEERS for the interview!! I look forward to hearing back from you.

Santi – Thanks to you for your interest in Nashgul, hope to see ya on the road someday and drink some nice shit together!! Cheers!!!!!