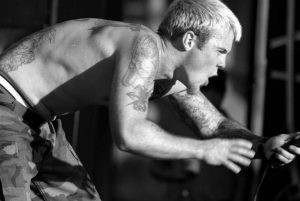 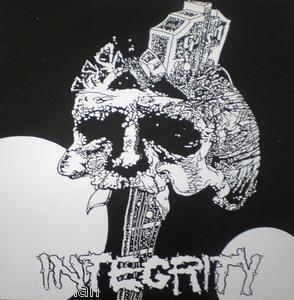 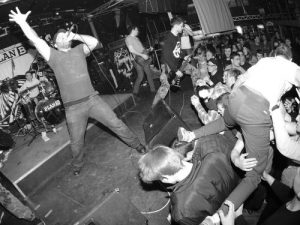 Dwid: No, it wasn’t him — it was another guy … he interviewed him with good intentions, but he ended up saying, “You know, I can’t print this.  You just talk shit about all these bands; that’s stupid.”  So, he called me up and described how this former member had been talking shit, and I was like, “Let me hear it!”  And me and Aaron just laughed at that interview.  We then took it and put it on my computer; chopped it up, and added sounds of, like, toilets flushing (Laughter) — and different stuff …
Jim: And you put that into a loop at the end: “People don’t wanna know …”
Dwid: Yeah.
Jim: You did a zine yourself in the ’90’s, didn’t you?  Blood Book?
Dwid: Yes: a “comedy” zine …
Jim: A comedy zine!?
Dwid: Yeah! … like a National Lampoon, or a Mad Magazine …
Everyone: (Laughter)
Jim: Honestly!?
Rob: Yeah — seriously!  Did you ever read it!?
Jim: I was researching the band Gehenna, and there was a Gehenna interview in Blood Book.  It was a really good interview.
Dwid: Thanks!
Jim: Yeah, you were talking to Mike Cheese, and saying, “You seem rather composed today.  Is something wrong!?”
Everyone: (Laughter)
Dwid: If you know the Gehenna guys … that would ring true!  (Laughter)
Rob: Yeah … that’s always remarkable … (Laughter)
Jim: How many issues of Blood Book did you do?
Dwid: Oh … maybe … six?
Jim: Wow.  When did you stop?
Dwid: I just kinda ran out of steam on it …
(Lori LeFavor, the owner of Infinite Productions, appears at the dressing room door along with her adorably cute pet dog.  Infinite was the promoter of this show, which — once again — was the final performance by Undertow that also featured Integrity as a supporting band).
Dwid: Let’s pause the interview for a second.  I think that’s Lori.  I’d like to say “hi” —
Integrity