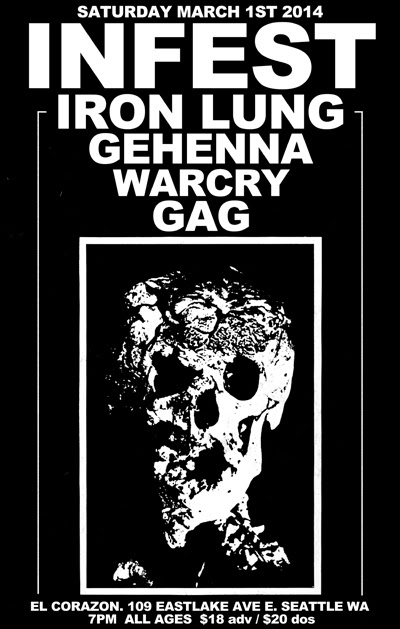 At the outset, Don’t Be Swindle readers, I regret to inform you that vegetarian nachos are no longer being served at El Corazon.  Sad but true!  Instead, you may now choose between tater tots, a hot dog, a “Seattle style” hot dog, or a quesadilla.  Naturally, despite bumming out (hard) over this piece of dreadful news, I soldiered on.  I refuse to allow an absence of “weekend nachos”, as it were, ruin the natural high of this historic show!  Hey, punk rock has never been easy.  (And truth be told, I didn’t want a belly full of artificial cheese, anyway.)
So there’s this band called Gag.  They’re from Olympia.  Did you read the interview with them in Maximumrocknroll?  I did.  I thought it was great.  However, I suspect that Gag as a collective may not care what supposed “journalists” (is that a thing?) write about them in “magazines” (do those still exist?) … because Gag can rest comfortably in the knowledge that when they’re asked to, they can bring it.  It’s hardcore for the hardcore, as the phrase goes, and resulted in the first circle pit of the evening.  The vocalist threw himself around the stage in finest rag doll fashion; guitarist Jose (who also handles vocals in the equally excellent White Wards) never failed to summon a sturdy rhythmic backbone; the second guitarist didn’t muddy up the sound; drums pounded, the bass throbbed … sonic catharsis achieved!  Gag received quite a bit of hype in the punk scene last year — thankfully, it’s deserved.  As you can tell from the artwork gracing their vinyl releases, this band has a highly developed artistic sense, which seemingly flows on tap in Olympia and nourishes its many sacred denizens!  (After all, “It’s The Water”, as the slogan for Olympia beer once had it; scores of incisive, thoughtful bands have called Olympia home over the years.)  Gag’s t-shirts also demonstrate an eye for artistic detail.  Interestingly, in a strictly musical sense, you might not expect that to be the case, given that Gag’s punk rock resembles a seeming patchwork of early ’80’s hardcore as it collides with the  elusive “mysterious” element of a modern throwback outfit such as Hoax.  Despite the relative simplicity and even tradition of their pounding caveman roar, Gag can’t help but reveal a deeper, more advanced shade of creativity in equal measure.  Go see them if they play near you! 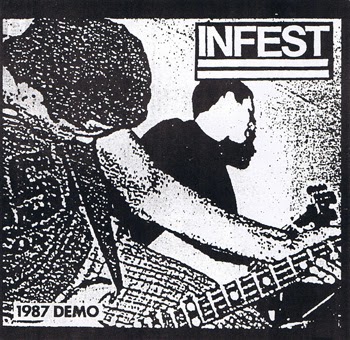 Warcry hail from nearby Portland, Oregon.  Todd Burdette, their frontman and vocalist, has been active in music for decades — most notably, perhaps, in His Hero Is Gone, followed by the now-cult Tragedy; he’s also mixed it up (in his apparent spare time) with occasional forays into “side projects” such as Severed Head Of State and Trauma.  In those bands, Todd usually plays guitar, but at least on this evening with Warcry, he brought his full menacing presence to bear on vocals alone.  I kept wondering if someone in the crowd would receive a glancing blow from the microphone, because when Todd wasn’t howling into it, he twirled it like he was about to lasso something, or he’d wrap it around his neck, then loosen it, only to throw it around and seize it out of the air.  Todd also pumped his fists relentlessly and flipped off the crowd at every opportunity.  Fittingly for me, they played “B.S.B.S.F.B.S.”, with its rousing chorus of “Bullshit/bullshit/fuckin’ bullshit!”  As Bruce Roehrs might quip: “YES!”  That’s my favorite Warcry song, but standout “When Comes The End” sounded incredibly tight and forceful as well, particularly with reverb and delay drenching the vocals.  If you attach negative sentiments to punk rockers who attain “lifer” status, and you look down your nose at Warcry as a result of that … well, it’s your loss.  Warcry are a great band; I felt honored to see them live.  (And yes, I bought the t-shirt!)
None other than The Infamous Gehenna took the stage next.  Prior to the start of the show, I’d been sitting on a couch in the back of a side bar at El Corazon, which was conveniently close to one end of the stage, while their guitarist and bassist warmed up unplugged on a couch right across from me.  The guitarist had sprayed some sort of lubricant on the neck of his guitar (an apple-red colored guitar which featured one of those crazy triangle/geometrically-shaped bodies, a sort of variation on the Randy Rhodes-esque “Flying V.”)  I hadn’t seen anybody spray oil on a guitar neck like that in years — usually, that’s what you do when you want what’s known as a “fast neck”, so you can play a lot of hyper-fast riffs on it without causing your fingers to bleed.  (“What band are these dudes in!?”, I wondered.  “They look like hardcore kids, but that riffing, it almost sounds like death metal …”)  Come to find out, it’s Gehenna — band of myth and lore; band with “notorious” vocalist Mike Cheese (who actually seems like a really nice guy … but keep that a secret); band of devious intelligence; overall feral, and long-lived, practitioners of Holy Terror.  Try the following experiment, if you will.  Take a Gehenna LP off the shelf, let the creeping darkness of the cover art filter into your senses, then flip it over and read through the song titles.  It’s quite a daunting experience.  A few of these song titles stick with you for years: “Mescalinpsychosis”; “Spiraling Into My Demise”; “The Choking Sands”; “Covet Thy Crown” (which the band played tonight!), and many others.  With the looming, starkly intimidating shadow that Gehenna’s art casts sonically, I half-expected to choke in fright as Cheese stormed the stage in an (imagined) destructive, suicidal rampage — a true disciple of G.G. Allin, perhaps?  Such was not the case.  Gehenna’s set seemed almost murderously, methodically controlled; in a manner of speaking, they didn’t have to be overly demonstrative as they slowly twisted the proverbial shiv in your side.  The band brought tight, professional drumming (unconfirmed rumor: Gehenna’s drummer that evening also played on Infest’s No Man’s Slave), with brutally fast and efficient guitar that somehow never descended into pure metal; fluid bass playing that kept everything grounded; finally, and most importantly, Mike’s vocals sounded as strong as if the band were playing in 1995, not 2014.  An all-around impressive set for a deservedly legendary band.  Gehenna closed with a Discharge cover, and the crowd went appropriately nuts.
Iron Lung followed — what an incredible force this band was, is, and likely always will be … they had me from the very first moments of opening song “Sexless//No Sex,” which was just as heavy and raging in real life as in its recorded version.  The sound was jaw-dropping; literally staggering.  I immediately rushed forward to be a little closer, personal safety be damned.  Iron Lung drummer/co-vocalist Jensen Ward wore a genuinely scary Von longsleeve emblazoned with skulls, pentagrams, and assorted homages to Satan, in the general spirit of what I’d expected previous band Gehenna to summon musically.  Yet the old cliché that “appearances are deceiving” holds true, because Jensen is in fact humble, approachable, and just plain nice in person, regardless of the “evil” vibe he might send off to a square.  He also has a rare sense of humor.  Jensen’s between-song banter lightened the mood considerably and made many in the crowd chuckle.  “Well, now … here we have a bunch of students, just learnin’ the game … yeah … all except one” — to paraphrase one of his comments, followed by: “Spending mommy’s money — because community college doesn’t pay for itself!”  That might not read as funny as it sounded in the moment, but Jensen had me laughing constantly — and it was welcome!  Not to mention, he’s also an absolutely fantastic drummer, dead-on accurate, hitting with furious power while simultaneously screaming bloody murder into a mic by the drums … who knows how old he is, but Jensen’s ceaseless energy could put a 21-year old to shame.  Iron Lung guitarist Jon Kortland occasionally joined Jensen on vocal duties, but mainly focused on that surgically accurate guitar playing, his hands a blur, with an enviably meaty, thick, heavysound that can also be found on any of the band’s many records.  I have to see Iron Lung again!  You should do the same (they tour a lot, so you’ll probably get the chance.) 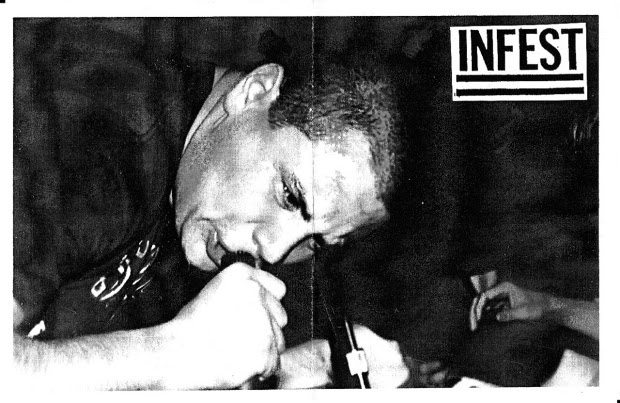 Finally … at long last … it was time for Infest.  A heartfelt thanks to Mike Crow of Inimical Records, Jensen Ward, John Pettibone of El Corazon, and all those who helped to realize a Seattle show for one of hardcore’s modern classic bands.  As the members took the stage, I noticed that Matt Domino, Infest’s guitarist, had some of the thickest forearms that I’d ever seen … he looks like he could bench-press a car, then pick it up and throw it half a mile!  Well, I suppose that’s all the better for playing those riffs (yes, those riffs! — you know the ones), in his offhand, effortless fashion.  Domino spent their set positioned next to his guitar cabinets, an immovable object amidst a churning sea of stage-divers.  Yes, of course the crowd went totally ape — it’s Infest!  You have to laugh at that admonishing sign on the wall at El Corazon: um, does that white stencil actually read “No Stage Diving”?  Haha, indeed!  Vocalist Joe Denunzio was just as curiously tan as he appears in photos, and equally as expressive, contorting his face into pantomimes of anger, hatred, and that certain joyous feeling that arises in converting all of that negative energy into passionate performance.  Bassist Chris Dodge deftly avoided dozens of stage divers; when the band would crawl through that sludgy, feedback-drenched flipside to their lightning-fast powerviolence, Gag guitarist Jose could be seen doing his best “creeper” dance, arms dragging near his feet as he lurched about the stage, only to fling himself at the mercy of the front row.  Infest drummer Bob Kasitz proved (as if any proof was needed) that he’s one of hardcore’s best musicians — man, this guy can play!  Dodge often turned to face Bob’s kit, intent on keeping the rhythmic grounding of the band in place despite the absolute chaos roiling throughout the club.  Musically, Infest’s set was a revelation, with each successive song somehow topping its devastating, mind-melting predecessor.  Believe it or not, but the Infest live experience is just as awesome as this review would have it — and that’s no hyperbole.  You have to see them for yourself!
After a triumph like this evening, one’s mind begins to wander to the next challenge: convincing Lack Of Interest to play Seattle again.  However, let’s not get greedy.  As it is, the sheer power of this Infest show might just be enough to carry Seattle for months to come.  Who needs the Super Bowl when you have hardcore punk on such a peerless level?
Infest