Hello
My name is Karol and I am running a facebook Warsaw Grindcore fanpage. I was asked to write a Warsaw scene report for Don’t Be Swindle so I thought “why not?“. In the following article You will find some information on a bunch of bands from the capital city of Poland and hopefully that is going to make You curious enough to listen to their tracks, follow the links, buy their music or possibly go to their gigs.
Obviously there is only one band such a report should start from and this is the one and only:
Antigama 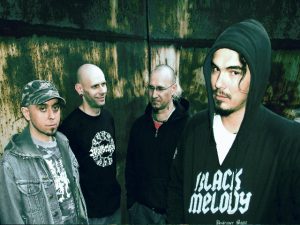 Do I really have to introduce these guys to anyone? After their Relapse releases their latest “Stop the Chaos“ EP was released by Poland-based SelfMadeGod Records (enjoy it via their label’s bandcamp). As far as I know they are supposed to hit the studio in the beginning of 2013 to again record that world class grindcore of their own unique kind. The last time I saw them live was when they were supporting Nasum during the recent Swedes’ farewell tour. The first time I saw them seems ages ago: with a half different line-up, right after they released their first Sweet Little Single, in a little club located in one of Warsaw’s former fortresses. If somehow You still do not know Antigama it means You lived under a stone in Siberia for the past ten years – crawl out and catch up! My favourite band. https://www.facebook.com/Antigama
http://antigamablog.blogspot.com/
http://selfmadegod.bandcamp.com/album/stop-the-chaos
Łeb Prosiaka
Legendary and most obscene Warsaw unit delivering heavy grindcore crust madness (Łeb Prosiaka means Piglet’s Head). Their charismatic vocalist makes every gig a show of its own kind using his special skills at achieving extremely hilarious levels of vulgarity combined with crushing grinding sounds performed by the rest of the masked-up orchestra. I fell in love with Łeb Prosiaka the first time I saw them. Everyone does. They do have some difficult to get releases and even more difficult to get T-shirts. Obviously the recordings do not express the sheer insanity of the experience called Łeb Prosiaka live on stage but they are absolutely worth checking out. Definitely my favorite band.
https://www.facebook.com/lebprosiaka
http://youtu.be/k–043p-yew
http://youtu.be/G-2KucJYsE0
Anus Magulo 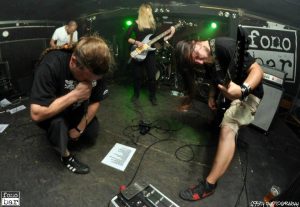 Formed in 2007 and representing the gore side of grind Anus Magulo lets You taste their vomit on 2011 “Chain Erection“ CD containing 19 fast and heavy tunes (incl. 3 covers and a remix). Currently recording their soon to be released EP but also focusing on playing live as much as they can so slowly but surely they get more and more attention and recognition they deserve. My favorite Warsaw grindcore band as they have lots of good energy and a female bass player.
https://www.facebook.com/AnusMagulo
Hesbollah
While not being really 100% grind band Hesbollah definitely fits in the grindcore scene. Formed by an ex-Antigama drummer this three piece, instrumental band delivers music that is quite difficult to label while at the same time it definitely can be called “extreme”. Existing for about a year now somewhere between grind, jazz and math core Hesbollah keeps rehearsing and recording new tracks. I am pretty sure You can expect some new tunes from them soon. Insane drumming and the freshness they bring makes them my favourite band.
https://www.facebook.com/pages/Hesbollah/253587334744677
Lues 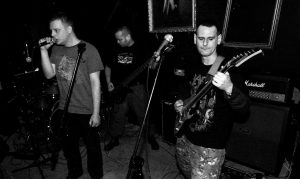 Silly to say: Lues has just suspended their activity. They were more of a hardcore/punk/grind band than pure grindcore squad but anyway it quite sucks that the decision was made just three days before they were supposed to play a concert really close to where I live. Hopefully they will overcome their problems and will be back even more powerful quite soon. They would be my favourite Grind band if they still existed.
https://www.facebook.com/pages/LUES/149608415106430
http://www.lues.pl/
Grossmember
While we are at bands that exist no more we absolutely must speak of Grossmember. Since death of their leader Jerzy in december 2002 (which makes it 10 fucking years now, wow!) the band ceased to continue. There are numerous split 7inch records to be found here and there – in various distros and internet auctions – their full length 2002 “Leave Us Alone” CD and a Tribute to Grossmember CD as well. One of the basic bands when it comes to Warsaw grindcore and underground scene in general, well known at the peak of their active period not only in the rest of Poland but abroad as well. My favourite grindcore band of those days. Jerzy was also writing a grindcore zine called Analphabetic Journal and some of the issues were available in English so I am pretty sure older grinders may remember this guy. http://www.discogs.com/artist/Grossmember
http://youtu.be/SeiJu0xadh4
http://youtu.be/t0XuanEbQmY
Herman Rarebell
Another quality band that I do not think will record anything anymore – Herman Rarebell was a bonecrushing side project of Antigama and Third Degree musicians. Find them on a 3 way split with the mentioned bands called “The world will fall soon and we all will die“ or on their own MCD called “Too late for peace…“. Very good, intense grindcore. Herman Rarebell was a great project, my favourite I must admit. http://youtu.be/JOhZH86Vlb0
http://youtu.be/SXcSt0jDMsQ
http://youtu.be/oDxT-OKuijA
Obviously while we speak of grindcore it will be nice to mention some more bands that are quite close when it somes to style, sound, attitude or even band members. From one side grindcore influences those involved more in Punk/HC scene on the other hand many Death Metal fans listen to grindcore on a regular basis. I personaly believe the following guys definitely deserve some of Your attention as they also create and influence Warsaw Grindcore scene in more or less direct way:
Drip of Lies

Heavy, crusty, metallic hardcore. I am afraid they are one of these bands that are better known outside Poland than in their motherland as they regularly tour Europe. They have recently released an album called “Failure“ and had a number of records before. Drip of Lies is killer live band – playing hypnotic and intense tracks filled with heaviness that’s very difficult to capture on studio recordings. As their drummer is a friend of mine and I really enjoy their live sound I must say they are my favorite band.
http://dripoflies.bandcamp.com/
https://www.facebook.com/DripOfLies
Wóda i Pety
Meaning “Booze and cigarette butts“ as anyone can guess this band is a d-beat/crust unit. They haven’t been around for too long although they have a really good demo (with maybe a little too long intro) released already and I am pretty sure that there is more great stuff to come from them. The members are former musicians of a number of Warsaw bands.
http://youtu.be/86gztUJlFXw
https://www.facebook.com/pages/W%C3%B3da-i-Pety/376809049053279
Government Flu 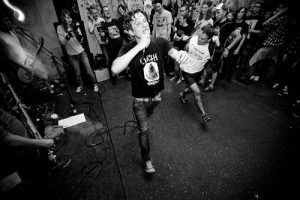 Fast, simple and noisy Hardcore that reminds of classic old-school Hardcore bands, Government Flu have released a few 7“ EP’s, a CD/LP and a 12” vinyl with their singles collected. Their drummer used to play in Vitamin X (if that may be any kind of a reference) and other members are/were in various HC/Punk bands from Warsaw. They remind me of what’s best in good old fashined hardcore therefore they’re my favourite. http://governmentflu.pl/
https://www.facebook.com/governmentflu
Violent Action
Powerviolence? Yes, please! Violent Action delivers their tracks of definitely heavier than Government Flu’s hardcore with additional power violence flavoring to it. I totally dig it. It sounds angry and raw and loud and that’s the way it should be! They are my favorite since I have discovered them recently so their latest 7” EP (the one with a terrorist on the cover) gets a lot of spins.
http://violentaction.bandcamp.com/
https://www.facebook.com/violentaction

Hitting 20th birthday mark in 2013 Refuse Records is a DIY Straight Edge label. Robert, who’s the main force behind it is also organizing gigs and does not limit himself (as one might have thought) to pure hardcore bands only. For example last summer I went to an absolutely insane show of Vaccine supported by Suffering Mind. As some of You might realize Refuse has recently released ass kicking Vaccine / Coke Bust split 7” EP. Generally speaking: Refuse’s impressive catalogue and Robert’s concerts are well worth checking out as he is really dedicated and hardworking dude.
http://refuserecords.bandcamp.com/
https://www.facebook.com/pages/Refuse-Records/183267901719633
When it comes to grind influenced metal these two immediately come to my mind:
Cicatrix
Not really from Warsaw but from the nearby town of Puławy. Formed in 1994/1995, released a couple of demos to finally greet the world with their 2010 “Beloved in Killing” full-length. As a metal band they mention Terrorizer, Carcass and Napalm Death among their influences which makes them worth a listen for every grind freak. They are my favourite band as their brutal death metal sounds really heavy and contains enough grind references to keep me enthustastic about them.
http://www.myspace.com/cicatrix666
https://www.facebook.com/cicatrix666
Centurion 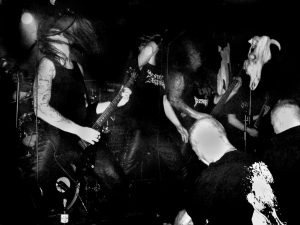 Death metal band playing it quite fast and brutal. Musically Centurion would perfectly fit any grindcore show although as far as I know they usually perform with metal bands that are slower and softer than these guys (which on the other hand is nothing difficult to achieve as they are heavy as fuck). Having been around since 1998 they really know how to put things together. Yes, they do sometimes slow down or play some melodic parts but generally one should expect fast and brutal tracks. My favorite death metal band of all mentioned here.
http://www.myspace.com/centuriondeathmetal
https://www.facebook.com/centuriondeathmetal
These were the bands I wanted to introduce to You in this report dear reader. I really hope You are interested enough to listen to them at least once. Obviously anyone who is interested can and will look further and find more, that’s how it works.
No report would be complete without some final words. Local scene in Warsaw, Poland is really wide and strong so anyone can find something for themselves from stoner/doom, through hardcore punk to death metal and grindcore. There is a huge variety of bands and some of them are absolutely great (reggae and hip hop underground are also very strong!).
The only thing that I complain about is not the highest number of live shows as many bands who tour Europe simply do not come to Warsaw. Travelling here from abroad (especially if You have no other gigs planned in Poland and You drive) is usually pain in the ass. Of course sometimes we are lucky to see some bands live on stage. I must admit that it happens more and more often and once they build these damn roads I hope there will be even more people coming here so we could hear and see them delivering their tunes. Recently except for the already mentioned Vaccine, we had for example Iskra or Full of Hell giving absolutely great shows. I also was told Terror’s concert was very succesful too but I had no chance of going there. Each of the gigs I am mentioning now took place in a different venue, which simply means there are clubs or squats where underground bands can perform.
Obviously if You happen to be in Warsaw or simply wish to follow what’s going on here, check facebook.com/warsawgrindcore for updates on music, concerts, releases or any other grindcore-related information (that includes screenings of independent, psychedelic films or B-class horror movies delivered by one of the Warsaw crews whose aim is to present these underground classics to people).
To make everything even more interesting we are planning on releasing some of the world’s coolest grindcore-themed t-shirts pretty soon so feel free to keep an eye on that too.
I hope You found this report useful and not boring.
Enjoy Warsaw Grindcore!
Antigama Government Flu Violent Action