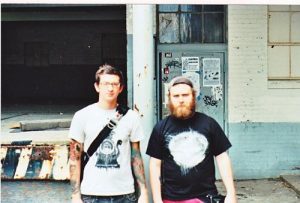 So what’s the background on Water Torture (band member names, how did you form, etc…)?
Moezes – drums
Matt – bass
Ian – bass
It started off as me and Moezes around the fall of 2011. Ian joined as 2nd bass probably 6 months after that.  Moezes and I have been playing together for a while now. We wanted to start a band that we knew would be able to go on tour. We have tried with other bands we had been in and there was one reason or another why we could not do it. We just Water Torture as the two of us so we did not have to worry about anyone else other then the two of us.
You guys recently finished up a tour with The Downgoing from Australia. How was it?
It was the best tour we have done so far. It was our first time outside of the northeast. We met a lot of awesome people, played with some great bands and got to see some of our old friends as well. We really did not know the boys in The Downgoing other then the emails between me and the guitarist. When we picked them up from the bus station the week before we left for tour, we would have a good old time with them.
You guys are super heavy live. Do you always tour with two bassists?
The only tour that we have done with one bass was the first. Ian was in another band with us and was the only other person we had played with that wanted to go on tour so I asked him if he wanted to play with us. I mean, we have one bass, why not add one more?
What brought about the decision to not have a guitarist?
One of the bands Moezes and I were in prior to Inerds was also just bass and drums. We are comfortable with working like that. As for water torture, we wanted it to be just the two of us at first and i dont play guitar anyway. Truly i cant. The strings are to small. I need a big old bass for my power chords haha. That’s kind of how it had to be even if we did not want to. Honestly, I love bass and drums bands. However, I feel some of them just are not full sounding, so i decided I am going to play my bass kind of like a guitar.
What made you want to play grind/powerviolence?

When i first got into punk, I came from listening to stuff like Deicide, Cannibal Corpse and stuff like that. I really liked the fast parts way more then the metal parts. Then i moved out of my home town and started going to shows and doing shows in my basement. From there, I found out about so many bands. Also, the main band that got me into PV was Man is the Bastard. Who would have thought that lol. After that, every band I heard that was just bass that brutal but weird and noisey, I was hooked.

How is the song writing process for you?
There really is not much to it. We dont really jam or anything like that. We like to come to practice with a whole song already written. sometime we tweak it a bit at we practice, but all i do is smoke weed, start writing, and see what comes out of it. Mostly in the early morning, when i get home from my overnights is when i want to work on writing songs.
What/who has influenced your playing style the most?
It was mostly local bands that i looked up too and always wanted to be like lol. The biggest would have to be Running For Cover from Buffalo. Go check them out right now and listen to the sickest riffs with the best basslines ever!
This is a techy/nerd question, but what set up do you use for noise?
Oh man, there are so many different ways i set up stuff. It depends on what kind of sound we want. If i want HNW, I have a soothing sounds machine that has different setting like rain, waterfall, etc. White noise stuff  for helping you sleep. I put that into a few distortions and you have a wall of harsh noise for days. For the last track on the sea of shit split I used a synth program on my ipad and programmed a loop into it and bit crushed it a little bit. The wacky ossilation in the mix is Moezes messing with Trogotronic noise makers. Actually, all the weird sounds in between songs on that albums are make from Moezes Trogotronic gear.
Do you guys split time in other bands or projects?
Moezes does not really do anything other then Water Torture. He does solo noise stuff every once in a while. Also does, Pacing, with me which is the two of us doing noise. As for me, I do a million other projects. I do breached hull which is a loop heavy kind of industrial sound. All of the sounds i get to make the noise are from scifi movies. The first release we did was all based on the movie Event Horizon. I also do solo stuff under the name Deceiver which is mostly HNW. I also do some noisecore stuff under Deceiver. I also do a noisecore thing called Sifting Through Dropping for Nuitrients. There are also a few other verious collaberations and whatnot. I like to keep busy haha.
How important is the DIY scene and what does it mean to Water Torture?
We would not be able to go on tour if it was not for the DIY scene. We have met so many people and promoters from all over the world because of the DIY scene. There is nothing better then playing someone’s house or a sweet DIY run venue. When you work with people that are not trying help out out of town band instead of making tons of money, there is nothing better than that. The people are just way more real and down to earth.
What do you think are the pros and cons of digital media in independant music?
PROS: the internet is a great way to get your music out to people without going on tour. When we put up our stuff on Grindcore Karaoke, it helped us so much. We made a bunch of new contacts and we have people come up to us at shows telling us that they saw our stuff on Grindcore Karaoke. It doesn’t hurt us on our record sales. If anything, it helps.
CONS: Ss for the cons you get so many people uploading their music that it over saturates everything with crap. If you do some searching, you can find the good stuff within the garbage.
What’s next for you guys?
We have so much stuff coming up right now:
7in split with SIXBREWBANTHA
5in split with Suffering Mind
5in split with Witchcult
7in split with HIRS
7in split with God’s America
lp on Nerve Alter
lp later in the year with To Live A Lie
We are also going on tour with Pizzahifive from Lima, OH in March. We also have a few sweet fests coming up in early 2013.
Seriously, how awesome is that Eagle Lift on you tour van? We were insanely jealous of it.
We love that thing so much. It makes my life so much easier when I am loading the gear after a show by myself. Everyone can bring all the stuff out to me and I can just load it in the back by myself. Also, if someone ever runs into the back of us, we will be fine.
Anything you would like to add?
Thanks for asking us to do this interveiw and thanks to everyone that have helped us out. Also, thanks to everyone that have supported us by going to a show, buying stuff from us, or just giving our music a listen.
Water Torture